Preparations for the new unknown

Of course, there were a few things to think about before the semester abroad . After finally making the hopefully right decision regarding the university and the place of study , it was time to deal with the tiresome paperwork. Thanks to your website, applying to the American university was more than easy. There is a guide that will help you make the application easy . Otherwise, the team is always available for any questions. The bureaucracy around the visa was rather less fun. Knowing that the Americans have been a little more precise and cautious with incoming citizens for some time, you certainly didn’t want to go wrong at this point. But that was also relatively easy afterwards. As a student, you have often been confronted with such formalities. The only thing missing was the student loan form , because somehow all the fun and jet set life has to be financed. But with a little practice with domestic student loans, the foreign student loan application ran like clockwork. Adding two forms and in the back of my mind that the central office for the application is in Hamburg, this bundle of A4 slips of paper was also sent pretty quickly with the post to northern Germany.

I was pretty lucky with the accommodation . After a friend of mine had spent his spring semester in Long Beach and, with a lot of luck, had found an American flat share through a Facebook group, I was able to take over his room without any problems and thus I had four American students my age right from the start , lived together . Definitely an advantage over all other Germans, who for the most part had nothing fixed before their arrival or some of them “only” had something to do with Germans. Which, in turn, almost everyone tried to avoid. Because: You clearly want to improve your English abroad and not your German. Overall, you should also pay attention to where the accommodation is located. Often one is dependent on a car,but you really can’t complain about public transport in Long Beach . Only the departure times are not taken so precisely here. Too early, too late, it can all happen.

Coming back to the accommodations, most international students have stayed in either Beverly Plaza, Alvista, or Park Avenue. As a rule, these apartments were hardly equipped at all. From furniture to dishes you had to buy everything and share a room on top of that, but that’s completely normal.

Overwhelmed by the size, beauty and diversity of the CSULB , the first days at the university turned out to be more than exciting. The introductory week is helpful, exhausting and amusing at the same time. In addition to a lot of information about class crashing and the American student life , there were also many non-university events such as a bonfire on the beach or an LA Dodgers game, where you get to know your new international fellow students. I would recommend doing as much as you can here .

The on-site courses definitely cannot be compared with German lectures. The American school system is very schooled, oral participation during lessons counts again and you write tests, papers or give presentations non-stop. After you have got used to the academic system in the States over time and since the level is really not that difficult, the university literally runs by itself. Check ehuacom to see more reviews from current students.

The on-site support from the Sa @ B team is really great . The people are very friendly and help you quickly. Hardly surprising with all the money we’re paying.

Although the university keeps you pretty busy throughout the semester with all its papers, assignments, tests, midterms and finals, there is still enough time to explore both the breathtaking beauty of California and other spectacular locations within the United States. For me, that meant specifically: countless road trips during the semester within California and the surrounding area (Catalina Island, Las Vegas, San Diego, San Francisco, numerous national parks, Tijuana / Mexico, visiting a firing range, various sports and Disneyland) as well as a long weekend in Chicago and Thanksgiving in Cancun. After finishing the last exams in December it was time to pack your bags. However, Germany didn’t have me back for a long time. Before the semester started, I decided to take full advantage of my 60 days after the end of the semester so that my return flight is dated at the beginning of February. The East Coast with New York City, Washington DC and Boston called, as did New Orleans, Florida and, last but not least, St. Louis. Teamed up with German students I knew and because of their relatives in the United States, it was simply a unique opportunity to gain even more great impressions of America.

Living in the USA

You should definitely be prepared for expensive food. Everything that is healthy and green costs a lot. In addition, one should deal with all the conversions early on, be it Fahrenheit, Miles, Feet or Pounds. At the beginning it’s really pretty confusing. And also the fact that taxes are added to any posted prices. In America there is really nothing to calculate beforehand how much you have to pay. And be prepared for a lot of fast food and not cook much yourself.

You can definitely look forward to great beaches, sunshine and relaxed people in California .

All in all , the semester abroad in Long Beach was the best I’ve had in my life so far . Not that I’m a couch potato or anything else, but the time in a foreign country, a foreign culture with foreign people, you experience it so intensely and carefree that in the end you don’t even want to go home.

I have lost a lot of dollars, but the experiences I gained during my stay abroad are priceless. 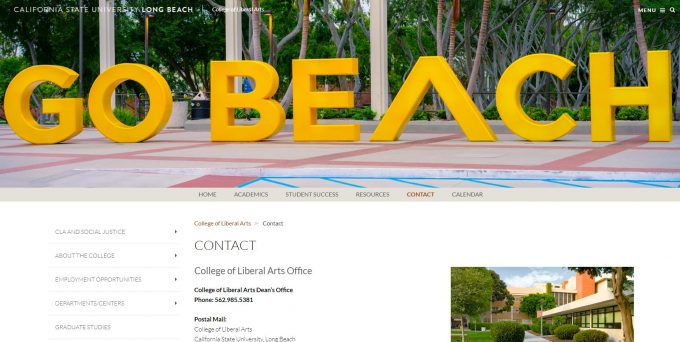