To visit Tibet, all tourists need to obtain permission to visit this area (permits).

Permits to Tibet are of two types:

Issued by the Tibet Travel Bureau in Lhasa to visit the “open” territories of Tibet. Only the Lhasa and Shigatse regions are open in the TAR, all other regions of Tibet are “closed” for tourists, that is, a second PSBY permit is needed. The original permit is checked by border authorities when boarding a plane to Lhasa.

The “closed” areas in Tibet, which require additional permits, include: Everest, Kailash, Manasarovar, Guge, Garuda Valley, Lamula-tsho and others.

According to the existing legislation of China, obtaining permits for foreign citizens is possible only when purchasing a travel package from licensed travel agencies in Lhasa (mandatory escort of tourist groups by a guide while traveling through these territories). Obtaining a permit to Tibet without buying a tour is impossible. The permit to Tibet strictly specifies the number of people in the group with passport data, a detailed route with exact dates and places to visit, the name of the accompanying guide. After obtaining a permit, it will be impossible to change the dates, route or number of people in the group.

Also, according to the law of the PRC, foreign citizens are required to stay in Tibet only accompanied by a local licensed guide, who is appointed by the host in accordance with the purchased tour package and according to the permit.

– all groups of people can get a permit, except for diplomats, journalists and government employees, whose travel must be arranged by the Ministry of Foreign Affairs of the Government of Tibet.
Entry into Tibet is carried out as follows: after you have arrived in Tibet, the original permit must be with your guide. You cannot leave Lhasa on your own, as an “Aliens Permit” is required outside the city. Otherwise, if you are stopped by the police, you will be forced to leave Tibet and face political and financial problems.

The term for issuing a permit is from 7 to 20 working days, depending on the tour.

Documents for obtaining a permit to Tibet:

If you enter Lhasa from Kathmandu, then the existing individual visas to the PRC in Nepal will be canceled, you must replace them with a group visa of the PRC. Because regardless of whether you received a Chinese visa before in your country or not, a separate permit is required at the Chinese border with Nepal. On the basis of a permit to Tibet and an invitation for a group visa sent to Nepal by our Tibetan tour operator, you can obtain a PRC group visa in Nepal. 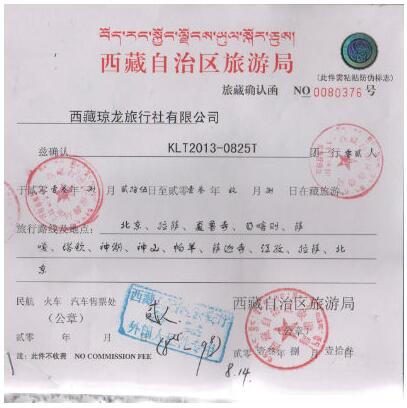