What is Antiphospholipid Syndrome?

In antiphospholipid syndrome, the body makes antibodies against proteins that bind phospholipid, a type of lipid that plays a special role in blood clotting.

There is also a common clumping of blood cells in the legs, also known as deep vein thrombosis. Clumping in vital organs is also possible, for example the kidneys or the lungs . The resulting damage depends on the size and location of the clumping.

For example, a clot in the brain can lead to a stroke . There is no cure for antiphospholipid syndrome, but doctors can use individual medication to reduce the risk of blood clots in those affected.

In antiphospholipid syndrome, the body makes antibodies against proteins that bind phospholipid, a type of lipid that plays a special role in blood clotting.

As a rule, the antiphospholipid syndrome is associated with relatively clear complaints and symptoms. However, the disease cannot be completely cured, so only symptomatic treatment can be initiated. Those affected suffer from miscarriages relatively often .

Embolisms and thromboses also occur , which have a very negative effect on the quality of life and on the everyday life of the person concerned. The antiphospholipid syndrome can also significantly increase the risk of a stroke or a heart attack , so that the life expectancy of those affected is often severely limited. Even infarcts of the kidneys are among the typical symptoms of the antiphospholipid syndrome.

In many cases, the patients suffer a pulmonary embolism and can also die from it. The symptoms are accompanied by heavy bleeding on the skin. There is often swelling and pain in the arms and legs. This also results in restricted mobility .

Likewise, those affected not infrequently suffer from psychological complaints that are related to the symptoms of the antiphospholipid syndrome. The symptoms themselves usually intensify without treatment, so that self-healing does not occur. Ultimately, if left untreated, the syndrome leads to damage to the internal organs and further death of the patient.

If a person has multiple incidents of thrombosis or unexplained abortions, the doctor may order a blood sample to be examined to see if there are abnormal clumps or whether antibodies to phospholipid can be found.

Symptoms are difficult to see. If unusual swelling of the arms or legs becomes noticeable, the affected person should consult a doctor as a precaution, as well as unusual bleeding within the first 20 weeks of pregnancy.

Antiphospholipid syndrome is one of the relatively common autoimmune diseases. The symptom is predominantly found in women of all ages. Optical signs are a bluish discoloration of the skin of the extremities and dermatological ulcers that can appear in various parts of the body.

Internally, there is already a shortage of blood platelets. Furthermore, the destruction of red blood cells runs. Those affected should be treated immediately by a doctor, as paradoxical bleeding can occur. The risk of complications in the antiphospholipid syndrome is broad. Women at risk are prone to thrombosis and miscarriages.

In pregnant women, there is a possibility of intrauterine death of the fetus. If treatment is delayed, further complications can worsen the symptom. These include an increased risk of heart attack, strokes, pulmonary embolism and even kidney infarction. Antiphospholipid antibodies can be detected in healthy people as well as in rheumatism patients.

The syndrome can occur as part of an independent illness or drug reaction. More often, however, it is based on an autoimmune disease. Chronic rheumatoid arthritis, psoriasis arthritis, scleroderma, cancer as well as HIV and hepatitis come into consideration. The medical findings decide the treatment plan.

Usually the patient is treated with ASA, heparin, aspirin or plasmapheresis. If a thrombotic event has already occurred, an anticoagulant drug is prescribed for a longer period of time. If pregnant women do not have any miscarriages or thrombi, they will be closely observed clinically to be on the safe side.

If there are repeated cases of thrombosis, embolism or inexplicable abortions, a doctor should be consulted. With the help of a blood sample and a comprehensive consultation with the patient, the doctor can determine whether the antiphospholipid syndrome is present and, if necessary, initiate immediate treatment. Whether a visit to the doctor is necessary depends primarily on the type and severity of the symptoms. A deficiency in antiphospholipids often has no clear symptoms.

However, if you notice swelling in your arms and legs that cannot be traced back to any other cause, you should see a doctor. The same applies to unusual bleeding during the first half of pregnancy and in general to cardiovascular complaints or unusual fever symptoms.

In the event of a stroke, heart attack or lung haemorrhage, the emergency doctor must be called immediately . Sudden urinary retention and stabbing flank pain indicate a kidney infarction, which must also be treated immediately. In extreme cases, first aid and resuscitation measures must be taken until the rescue service arrives.

Treatment for antiphospholipid syndrome usually consists of administering a drug that reduces the risk of blood clots.

If thrombosis is detected, treatment consists of medication with blood thinners. These include: heparin , warfarin and aspirin . Similar therapy during pregnancy is more complicated, expensive and requires regular injections, which have a certain risk of side effects. Aspirin and heparin can also be prescribed during pregnancy. Warfarin is usually not used because it causes pregnancy defects.

Only rarely will a doctor recommend warfarin if the benefits outweigh the risks. Blood-thinning therapy during pregnancy is complicated, but it is very successful in preventing miscarriages due to the antiphospholipid syndrome. During appropriate therapy, the doctor will test the blood’s ability to clot to make sure that the patient’s wound is healing well if there is an injury.

The prognosis of the antiphospholipid syndrome depends on the location of the vascular occlusions and the frequency of occurrence of thromboses. After a developed thrombosis, a longer treatment time must be expected in order to achieve freedom from symptoms. B.

A permanent cure is possible and very likely with a healthy lifestyle. Pregnant women who have not previously suffered a thrombosis also have good prospects of recovery. You will be treated once and you can count on the fact that you will not experience any impairment until the end of the pregnancy.

The outlook is less optimistic for women who suffer from multiple vascular occlusions shortly after delivery or patients who are diagnosed with multiple thromboses after surgery. There is a threat of multiple vasoconstrictions that spread to numerous smaller and larger blood vessels. This creates a congestion of blood in which several organs are not adequately supplied with nutrients and messenger substances at the same time. If an organ failure occurs , the patient suffers a life-threatening condition.

The more frequently a patient suffers a thrombosis in the course of his life, the worse his prognosis becomes. Relief can be achieved by changing lifestyle, learning to be sensitive to early warning signals or using precautionary techniques. At the same time, the likelihood of occurrence is significantly reduced.

There is no prevention of antiphospholipid syndrome. However, if you are aware of your illness and may be in therapy, certain aspects of daily life should be taken into account. If blood thinning is performed, contact sports should be avoided and soft toothbrushes and an electronic razor should be used. If no medication is taken, the doctor should be informed about the disease with every medical treatment.

As a rule, no special follow-up options are known for antiphospholipid syndrome. The patient relies primarily on a doctor to treat the condition so that symptoms can be relieved and further complications avoided. However, a complete cure cannot always be achieved. The earlier the antiphospholipid syndrome is recognized, the higher the probability of a positive course of the disease.

In most cases, this condition is treated with medication. It should be noted that the ingestion can lead to various side effects. First and foremost, attention should be paid to taking the medication regularly, taking into account possible interactions with other medications. Consult your doctor if you are unsure.

Miscarriage can often be prevented by taking the medication. Furthermore, contact with other sufferers of the antiphospholipid syndrome can also have a positive effect on the further course of this disease. It is not uncommon for this to result in an exchange of information, which can be helpful for the further process. Support from friends and family can also be very helpful.

Regardless of the form of antiphospholipid syndrome, all sufferers benefit from a healthy lifestyle that reduces the risk of thromboembolic events. First and foremost, this includes giving up smoking . A lack of fluids and exercise, obesity and high blood pressure that has not been treated for a long time are other factors that can be easily influenced by changing lifestyle.

Patients with APS should avoid using contraceptives that contain estrogen, as these can promote the development of thrombosis. All hormone-free contraceptives can be used as an alternative. After a specialist consultation, it is also possible to take a so-called mini pill based on progestin .

Pregnancy should be carefully planned due to the increased risk. The treatment of the antiphospholipid syndrome must be adapted accordingly during pregnancy in order to prevent spontaneous abortions and not endanger the fetus. Women affected by APS who want to become pregnant should therefore inform themselves in good time about possible risks and treatment options during pregnancy.

Asymptomatic APS patients who are treated with low-dose acetylsalicylic acid or who are only observed have hardly any restrictions in their lifestyle. However, it makes sense for them to familiarize themselves with the possible signs of a thrombosis so that therapy can be started quickly if necessary.

The exchange of experiences with other affected persons in a self-help group is also a valuable help for many APS patients in coping with everyday life. 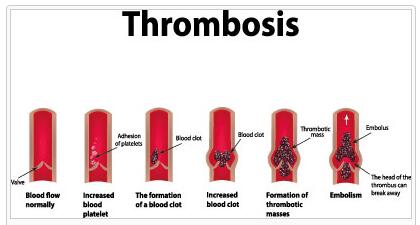